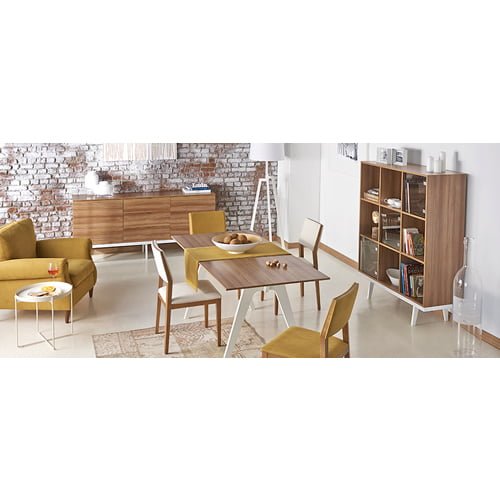 One of the first furniture and kitchen producers in Turkey, Kelebek Mobilya is also among the oldest and longest established corporations in the Republican era. Kelebek Mobilya was founded in 1935, in the Haliç district of Istanbul, with the objective of producing plywood for the wings of the first domestically produced airplanes of the country. Celebrating this year the 80th anniversary of its foundation, Kelebek Mobilya is an industrial giant now, with its 186.000 m2 which is indoor area, where it produces furniture, kitchen, bathroom groups, living room groups and special wooden equipment with its high quality production standards. The state-of-the-art integrated band systems, as well as massive and coating techniques that are examples of German and Italian technology, are used in the production. Kelebek is the leading furniture producer in Turkey and has a very wide product range, including furniture forms specially designed and developed by the company’s own designers. Providing a comfortable moving facilities in their living spaces with its panel furniture systems, Kelebek Mobilya meets every kind of customer needs with its various collections that are elegant, practical, high quality, and combinable; as well as with endless alternatives it provides, thanks to its rich product diversity. Kelebek Mobilya presents its products to the judgment of its domestic consumers at more than 120 different furniture and kitchen Kelebek stores around the country, apart from being among the prominent brands in international markets with its standard and custom design export products sent to approximately 15 different countries. Along with its prestigious products, Kelebek Mobilya is among the most reliable companies in Turkey also with its special Düzce facilities, 40.000 m2 projects and collective undertaking activities it realizes successfully.

As one of the oldest industrial corporations of the Republican era, Kelebek Mobilya was founded in 1935 for the production of plywood parts of airplane wings. The company continued plywood production at his Haliç facilities in Istanbul under the trademark of Kelebek until 1986. In 1978, Kelebek Mobilya launched its Modular Furniture Factory in Düzce as one of the best and largest factories in Europe, with the technical collaboration of best projects groups in the world. Offering its shares to public at the stock market (IMKB) in 1990, Kelebek has had the status of a joint-stock company since then. The corporation is getting prepared for its 80th anniversary celebration this year and continues to produce furniture, kitchen and bathroom groups, living room groups, and special wooden equipments, always employing the latest technologies at its 186.000 m2 facilities, the 40.000 m2 area. of which is indoor

1935 – Started plywood production at Haliç for wings of the first domestically produced airplanes.

1983 – Reached the figure of 100 points of sale in Turkey. Kelebek Mobilya became the most prevalent furniture brand it the time.

1990 – Company shares were offered to public at the stock market.

2014 – Received the IMOB Design Award and became The Fastest Growing Brand in its Sector.