After the stress of the wedding planning, the tiring nature of the day itself, and the exciting but often draining reception, you’ll probably want to find somewhere to relax for your honeymoon. It can be even better if it’s somewhere quiet, unexplored and distinctly lacking in people. Here are our top locations for an unexplored, relaxing honeymoon.

Sapa, Vietnam
Sapa, in Vietnam, is not somewhere you might instantly think of for a honeymoon! But it’s a great balance of popular and quiet. Vietnam has a growing tourist scene, and Sapa is part of that – but it still remains relatively small and unknown about. The town was originally established by the French, so there’s a beautiful combination of local architecture and French colonial era housing. Surrounded by mountains and beautiful rice terraces, it’s a great place for those of you looking for somewhere quiet, but not isolated.

Herm, the Channel Islands
If Sapa still sounds a bit too busy for you, have a look at Herm, one of the small Channel Islands near Guernsey. It’s just over a mile and a half long, and can get packed in the summer holidays. Come spring and autumn though, it’s much quieter and due to it’s tiny nature you’ll feel like just one of a lucky few there. With golden-white beaches, hidden coves and tiny chapels, it’s a perfect miniature world to explore – just the two of you.

The Galapagos Islands
Fancy somewhere less explored? Try the Galapagos Islands off the coast of Ecuador. If you’re interested in hunting down unusual wildlife, this is definitely the place for you. With giant tortoises, seals and much more it’s a great opportunity to spend some time bonding over wildlife spotting. Whether you stay on one central island, or hop between them, this is the perfect place to unwind in amid the secrets of nature.

An Alaskan Cruise
Fancy a cruise, but not so interested in the huge cruise ships? Try heading round the Alaskan coast. Many of the harbours are so small that the large ships can’t make it in, so it’s easier to find a quieter, smaller ship. Spend some time between the icy glaciers, and cuddle up beneath a cold, star-strewn sky. There’s the chance to head out into the unexplored forests, or curl up in front of a fireplace in a little coastal village. Whichever you choose, its sure to be memorable.

Leh-Ladakh, the Himalayas
The Himalayas are a popular honeymoon choice, so you might be wondering where you could go that’s relatively unexplored and quiet. Head to the town of Leh in Ladakh. It’s traveller-friendly and easy to access, but still quiet. With a Tibetan palace, traditional style houses and steep pathways, you’ll get a real taste of the country. From here you can head into the valley of Nubra, an unspoilt area of the Himalayas where you can see glaciers, Buddhist monasteries and even camels.

Suriname, South America
Suriname is an unusual place, with a mix of Dutch-colonial towns and rich, unexplored jungles. This is perfect for those couples looking for the chance to adventure, while winding down in somewhere cosy and familiar. A multicultural location, it’s best to plan ahead- language variation can make it tricky, but worthwhile, to head out into the jungle with a local tour group. Make sure to head to Galibi’s Nature Reserve too – it’s a great place to see leatherback turtles between April and August.

Dobrota, Montenegro
Dobrota is a coastal town in Montenegro, close to Kotor. Staying here rather than in the centre itself means you can get away from the bustle of the city but still opt in to visiting if the mood takes you. Montenegro is a country well suited to those looking for an outdoors-y celebration, with rafting through the Tara canyon being a particular highlight.

Lake Bled, Slovenia
Lake Bled looks like something from a postcard – with a beautiful green/blue lake, a medieval castle on the edge of a cliff and a quaint little church. It can get packed over the summer season, but quietens down the rest of the year – so if you want to explore it at your own pace, avoid the peak seasons! It’s close to the Vintgar Gorge, and though the town itself is packed it’s easy to head out away from here into the more unusual areas of Slovenia. 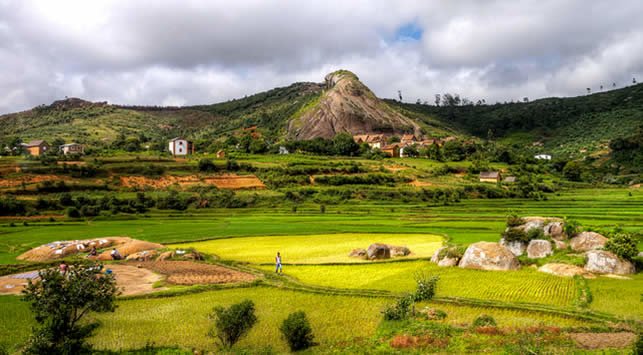 Madagascar
What list of unexplored destinations would be complete without mentioning Madagascar? We’re still discovering new species out there, so there’s plenty to see and explore. Make sure to spend some time on the coast before heading into the rainforests. Whilst nature might be the main attraction, there’s old plantations and Rova, a fortress-palace, that you can spend time wandering around as well.

By Alfred Stallion and ShaktiHimalaya.com!